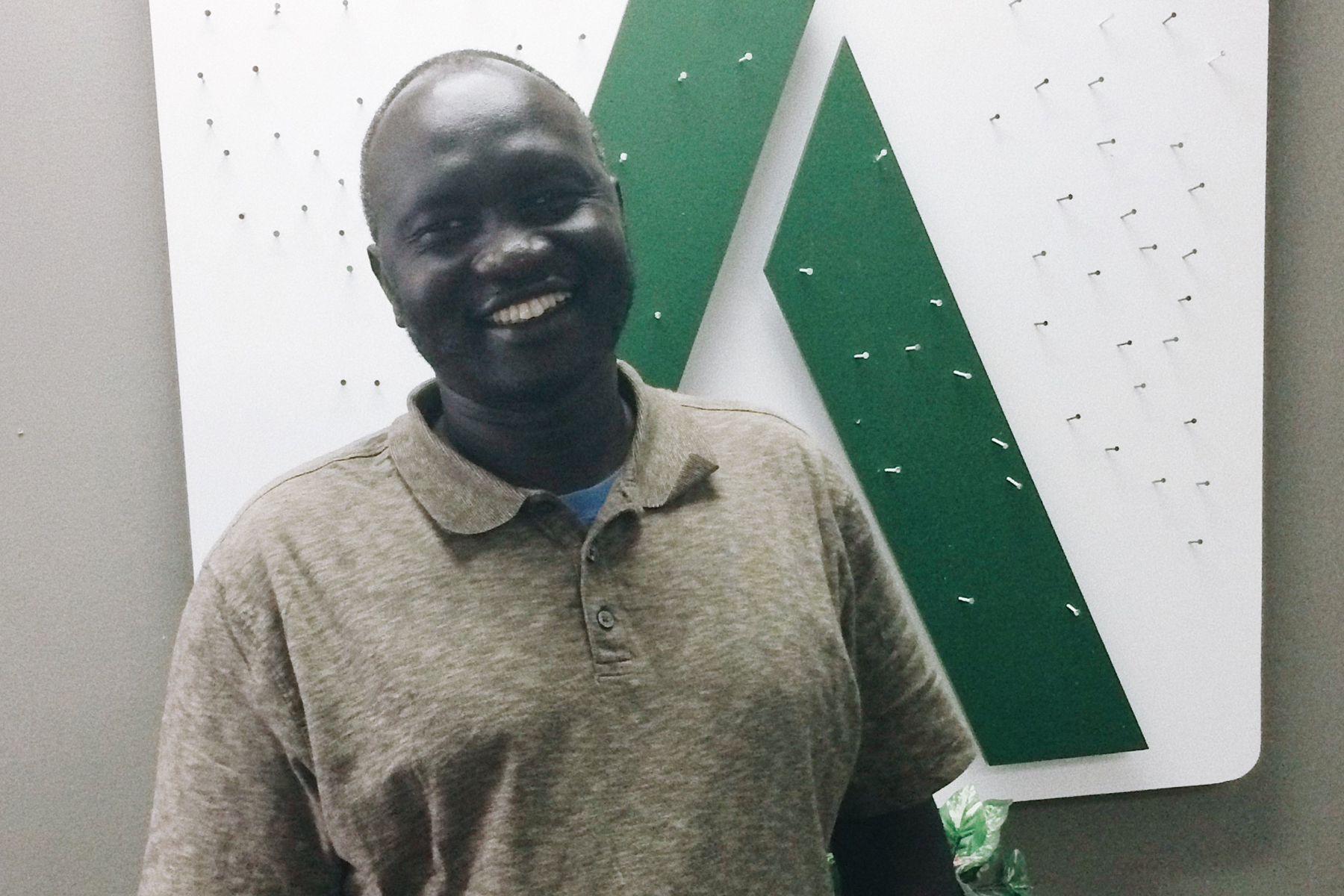 “When war came to my village, we fled to Ethiopia. If we went back, we would be killed.”

The year was 1996 when he and his father, brother, wife, and two children were forced to flee. While the world was readying themselves for the Olympic games in Atlanta, they were walking through the desert, with thousands of other displaced Sudanese.

Candidly, he shares, “I had one child on my neck, and one [child] on my back. They would start crying because there was no food and no drink. People were starving. You would see people dying.”

But dehydration and malnutrition weren’t the only enemies. There were wild animals— lions, hyenas, and crocodiles— also looking for their next meal to eat.

Luke was 24 years old, and instead of settling into life, he was starting over. Every dream he ever had for his family and career was abandoned back at his village.

Now, a camp full of makeshift tents was their home.

Food was their economy.

Letters traced in the dirt was their children’s only source of education.

And a ticket elsewhere was their only source of hope.

“UNHCR would nail a list to a tree, every month or so. A list of everyone [cleared to] go to America, Australia, and other countries.”It would be three years before Luke and his family’s names appeared on that list. A mixture of relief and fear riddled their conversations. They survived the treacherous African desert, but could they survive starting over in the United States?

“When I came to this country, I worked really hard,” Luke describes as he thinks about what it was like to start over. “I kept working and working, but I didn’t see anything that I was working for. I talked to my wife about it. I said, ‘You see, I am working, and you’re working, but we’re not getting anything.’ I thought there might be something missing.”

Despite years of faithful work, he and his family were still barely scraping by.

That was when Luke’s wife suggested he pursue skills training so he could work his way into a better job.

“I didn’t think about going to school [in the first few years after arriving], because I had a family and my concern was I just needed to go to work to provide for them,” he explains.

But now Luke knew his wife was right: it was time to go back to school.

When working hard wasn’t enough, Luke Werga took the advice of his wife and tried a different approach to bettering his career: pursuing an entirely different one.

Just a few short weeks after their conversation he started classes at a local technical college with the goal of becoming an HVAC technician. With no prior experience in HVAC, he simply decided he would learn it.

“There are things you just have to do. You have to learn. Anything you believe you can do, you can do it. You will do it.”

Up until this point Luke had been a farmer (in Sudan), a janitor, and a warehouse worker for a popular retail store. But now, the desire to improve his family’s circumstances was greater than any fear about leaving comfortable for the unknown.

“I thought, this is not going to be enough,” Luke shared. “I need something else.”

At the recommendation of a friend, he reached out to another Luke— Luke Keller.

Luke K. had recently started a construction trades training program, in Clarkston, Georgia. A problem solver and smart businessman, Luke K. had taken notice of two problems: one, the growing need for skilled tradesman in the job market, and two, the reality that many refugees, were still living in low-income households even years after resettlement.

He launched what has become Tekton Career Training in 2012 to bridge the gap between the two problems. The organization serves the “displaced and disadvantaged” through four construction trades training programs: welding, electrical, carpentry, and pipe-fitting.

When Luke Werga heard about Tekton, he signed up for not just one, but two courses— welding and pipefitting— knowing that the these skills plus the HVAC training would provide him with not only greater opportunity, but greater adaptability within the workplace.

Every weekday he drove to the technical school, and every weeknight he trained at Tekton. Even on weekends “off” he and a classmate most often met with their teacher for extra help, and worked as many side jobs as Amplio Recruiting could give him.

“I was really learning a lot,” Luke remembers, then admits, “It was hard.”

The support of his wife, and encouragement from his teacher kept him going. The weeks turned quickly into months. Finally, two years after he began, Luke was finally ready to fully re-enter the workplace, armed with an entirely new skill set.

Luke Werga had taken a great risk, and put in the work. He had three certificates to prove it. Now, he waited to see if it would pay off.

Amplio Recruiting was able to place Luke at a local heating and air company in a starting role of “runner.” Even after two years of extensive training, his job was simply to deliver parts to technicians on site. Luke made the most of the opportunity to learn from other technicians. For a year, he observed their work and asked questions to gain a better grasp on technique. Next, he moved up to technician assistant. In all of his waiting, Luke did not despair. He kept learning and growing, and making the most of every opportunity.

Finally, after years of pursuing every ounce of information he could lay hold of, he earned the position of technician. He drives his own company truck, and makes more than triple his former, hourly employee salary— plus benefits.

Now he’s the one helping other soon-to-be technicians.

“If I have all of this knowledge, why should I not give it to other people?” he poses the question, rhetorically.

Refugees like Luke are proving their talent, grit, and growth mindset in companies across America. Their resilience, adaptability, desire to prove themselves, and eagerness to help others as well, make them top-notch employees who will grow with your company for the long run.

For more reasons why the refugee workforce is your labor shortage solution, click here. For more information about hiring refugees, click “Contact” from the menu above.