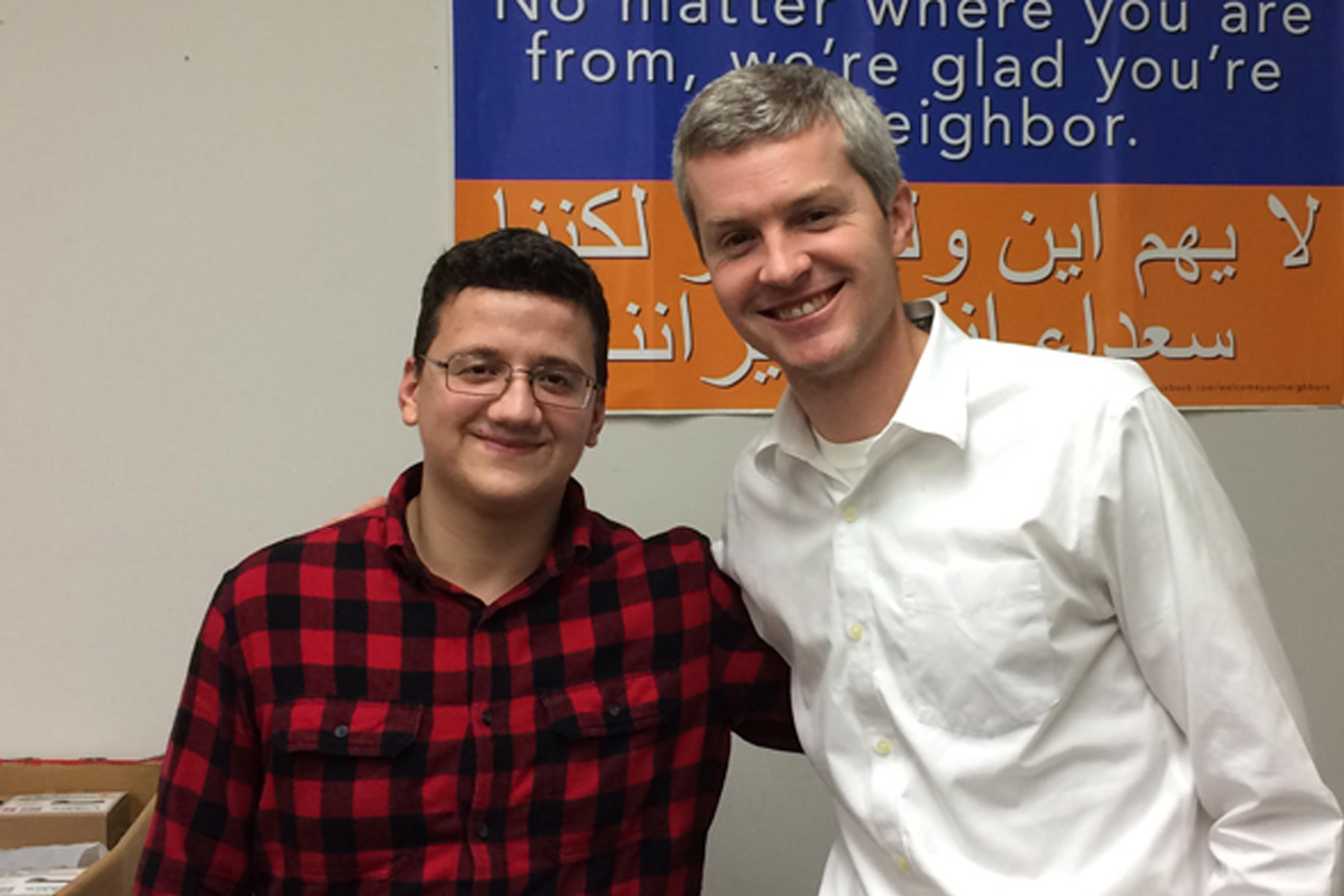 Mohammad’s alarm wakes him out of a deep slumber. The sun is not even up when he wills himself out of bed to get ready for the long day ahead.

The sound stirs his six-year-old brother, who rolls over and falls promptly back to sleep. Mohammad dresses, and slips his heavy school books into an overburdened backpack.

After a hearty breakfast, he bids “maʿ al-salāmah”, “with peace”, to his mom and heads out to catch the bus. In a few more months, these early mornings will pay off. He’ll finally have his GED, the first step toward his dream of becoming a doctor.

On the college campus, you would never know Mohammad didn’t speak any English just seven months prior. Or that his education came to an abrupt stop more than three years ago.

He never did anything to deserve the war that beset his beloved nation, but Mohammad is determined not to allow it to continue holding him back.  He keeps pace with his classmates, listening intently and asking questions.

After school, many of  his peers head home to study. He heads to work.

Mohammad slips into a crisp clean uniform and clocks in. The pungent smell of cheese has become familiar, and almost comforting, to him. He sees the blocks he cuts and packages as building blocks to his family’s future here in the U.S.

His supervisor, Orlando, stops by to greet him. The two have a special friendship, forged by mutual gratitude.

Orlando and the team at Gourmet Foods International have welcomed Mohammad at a time when the nation’s fears and negative sentiment toward his people have risen to an all time high. His co-workers feel more like family.  They check in on him, and encourage his dreams.

Over the past few months, Mohammad has proven to be more than just a dependable, hard-working employee. His ability to translate between Arabic and English has opened the door of opportunity for the company to hire more Syrians, like him, including women who have never had the opportunity to work before. Mohammad has played a huge role in helping the department grow to healthy levels of staffing again. Productivity and morale are up for the first time in years.

His shift ends, and Mohammad boards the bus again to head home. He fights to keep his weary eyes open so he doesn’t miss his stop. At home, his family gathers around the table, sharing a meal, and swapping stories about their day. His youngest brother catches his eye, hopeful for a few minutes of his attention after dinner. Six-year-olds, it seems, never get tired.

There is much studying to do before Mohammad can finally rest, but he makes the time to play. How could he not? After a good-natured round of hajila (hopscotch) with his brother, he is surprisingly energized, and settles in for the evening with his mathematics book.

Tomorrow, he’ll do it all again.

A 2017 report from the Migration Policy Institute revealed that “refugee men are more likely to work than U.S.-born men, while refugee women work at the same rate as their U.S.-born counterparts.” The reason behind their motivation is not complicated: after being forced to start life over again, refugees are driven by their desire to regain some sense of the life—and dignity— they lost.

It is a daunting task, with three primary areas they must re-establish: career, capital, and community. For now, we’ll look at the first two.

With limited financial assistance, the race to secure income begins the moment their plane touches down. Adding to that stress is the reality of navigating an unfamiliar employment processes— in a language many are just beginning to learn.

We cannot emphasize enough the fact that the vast majority of refugees already had steady and successful careers before fleeing, but refugees who are new to the English language often struggle to articulate their prior skills and experience effectively.

The other unfortunate reality is that many of these careers don’t carry over into the American marketplace. Refugees like Zinah, who we met in chapter two, have to completely change fields in order to gain some forward momentum. As one individual best described it, to refugees, USA stands for ‘You (U) Start Again.”

Re-establishing capital is another motivating factor behind the desire to work. Many refugees have had little or no access to work for months, or even years, prior to resettlement. With no credit history, and often no savings safety net, financial security is a priority.

As the clock ticks and their dollars dwindle, it’s no wonder many refugees end up taking jobs for which they are grossly overqualified. But this doesn’t seem to deter them from putting in 110% effort in any role they fill.

Because of their high motivation, the vast majority of refugees possess an unparalleled work ethic. It’s what empowers individuals like Mohammad to work one or more jobs, care for their families, and pursue higher education— and surpass others while doing it.

This strong work ethic results in an obvious benefit for companies: higher productivity.

Compac Industries, in Atlanta, tripled their production after trying the refugee workforce. Based on previous performance, the expected daily quota for pacifier clips was 300. After just a few weeks experience, the six refugee women they hired were consistently making 600-900 clips per day without sacrificing at all on quality. One individual produced 1,100 clips in one day. All this happened while chatting, laughing, singing along to music on their boombox, and rolling around in their comfy office chairs. Everyone was amazed.

A far cry from the charity cases they’re often made out to be, refugees have proven that they will take, and be grateful for, and make the most out of every ounce of opportunity they are given— and give back more.